Catch Me If You Can!

For many dog owners one of the biggest fears is losing their dog. A dog can slip out of the door, pull the leash out of your hand, jump or dig under a fence and many other things that can result in a dog running away.

If you have ever experienced a dog running away from you, you know how gut wrenching and heart stopping the feeling is. Will I get my dog back? Are they gone forever? Are they going to get hit by a car?

Whether a dog has run away in fear or fun, you just want your dog back and what you do in the first few seconds of a dog running away is crucial. Here are some do’s and don’ts when a dog runs away: 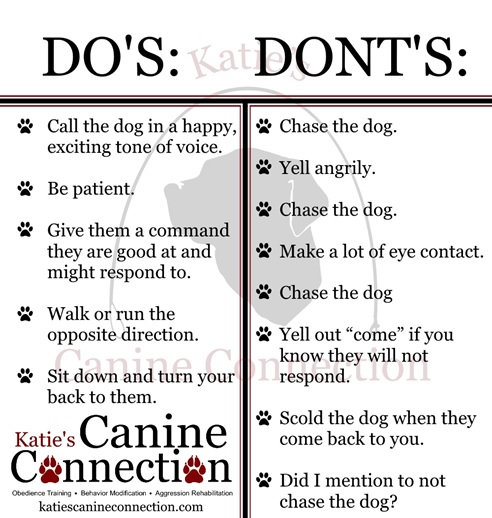 That said, the goal is to have a dog that won’t run away! To obtain that goal, you must train your dog and maintain that training. Dogs are not computers that you can program once and be done. Even the most highly trained dogs need regular maintenance training to keep their skills and knowledge sharp.

In an upcoming post, I’ll give you tips on how to teach your dog a reliable “come” command. 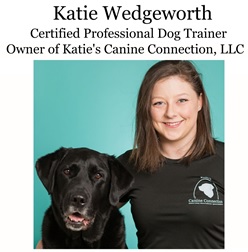 Pet FBI is excited to announce our collaboration with Helping Lost Pets. Pet guardians who have lost a pet will now enter a report only once at either site and the information will automatically populate both databases. The larger and more comprehensive web-based information source will greatly increase the chances of reuniting lost animals with their families.

Lost Dogs of America and Lost Cats of America, additional project collaborators, will lend their considerable Facebook reach outside of Ohio to share posts on their respective social media pages.

We are thrilled about the potential of this collaboration, and we look forward to working with the dedicated team members of Helping Lost Pets, Lost Dogs of America, and Lost Cats of America!

Pet FBI was founded in 1998 in Ohio as the one of the first web-based lost and found pet services. In 2014, the service was expanded to serve the entire United States, Puerto Rico, and the Virgin Islands. Helping Lost Pets created their map-based lost and found database in 2010. They serve the United States and Canada. All services provided by Pet FBI and Helping Lost Pets are always free of charge.

Chuck first showed up on our deck as a scrawny feral (wild) kitten. We took him in and gave him lots of attention and affection, but he never overcame his primal fears and would always run from us, unless we were tucked away in bed under the covers. He felt safe then and would knead and purr and delight in being petted and rubbed. 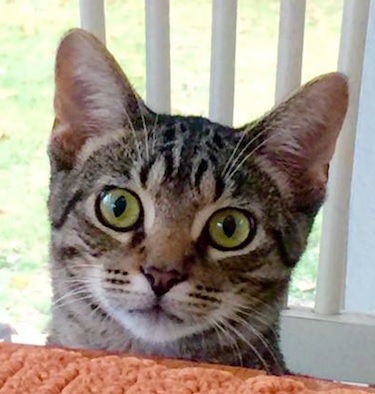 Last Spring, after three years as an inside cat and contented companion to our other felines, Chuck slipped out through a door that had accidentally blown open. I think he went through that door more out of curiosity than any desire to escape, but once outside, all his wild instincts were awakened and it was hard to get him back in.

The Pet FBI website often states that anyone can lose a pet, and we should not condemn the pet’s family. In almost twenty years as Executive Director of Pet FBI I have seen many cases of people who find lost pets, think that the family must have been careless, and use that as an excuse to keep the stray and not try to return it. But from painful personal experience, I can say most emphatically that ANYONE can lose a pet and should not be blamed for it.

Be aware that cats hang around for a while and hide. To lure Chuck back, we tried every tip and trick recommended on the Pet FBI site, all to no avail. If we tried to leave food for him, the raccoons got it as soon as we put it out. We finally found a way to outwit the raccoons by extending the legs of a table, making it possible for a cat to jump onto, but too high for a raccoon to climb.

You may have to trap. When a pet is lost its instinctive fearfulness kicks in and it may not always come to you. We bought an inexpensive security camera to monitor our deck to see if Chuck was still around. The security camera caught an infrared photo of a cat that looked like Chuck who came every night and jumped on the table to eat the food we had set out. We set a trap and caught it! We were jubilant until we took the trap into the house and into the light and saw it was not Chuck – just a tabby look-alike, undoubtedly a neighbor’s free-roaming pet, so we released it. That was the first of seven Chuck look-alikes we trapped over the six months we spent looking for him!

Take advantage of web-based resources, including social media. We used the Pet FBI database, Nextdoor.com, Facebook, and Craigslist. That resulted in many sighting reports. 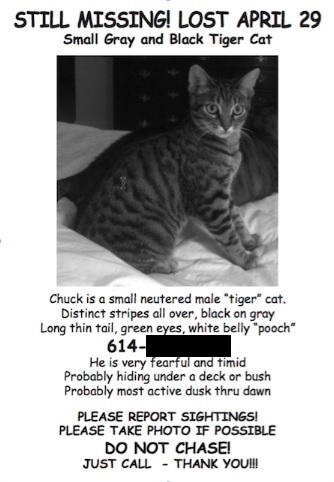 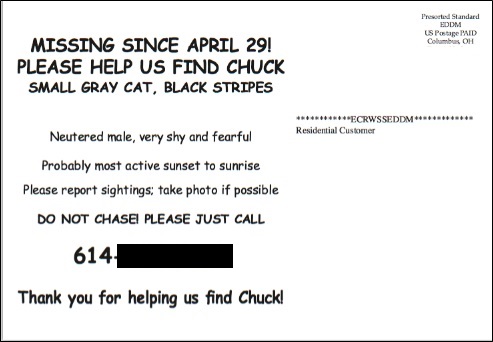 We had this 5×7 inch postcard made up by a local printer that also handled the EDDM mailing.

The web-based reports, the flyers and especially the EDDM mailing produced over one hundred sighting reports.

Keep a record of sightings. People were so helpful! We kept a careful record of the sightings: who called, when and where. We plotted the sightings on the aerial map we had printed out. When there was a promising report or a cluster of sightings, we would set up a food station and a trail camera.

Follow up on sightings, using a trail camera if possible. We were fortunate to be assisted by two women who volunteer to help people recover lost pets with the aid of a trail camera. Trail cameras are motion activated and send photos, including infrared night photos, to a mobile phone via the cellular network. Then the volunteer who is monitoring the camera transmissions sends a text or an email with the photo to alert us. That was how we discovered and trapped all the wrong cats. Gray tabbies are all so similar! 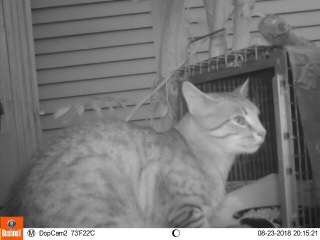 An infrared photo from the trail camera. We monitored this cat for several days before we trapped him. It was not Chuck but sure looked like him! He was definitely feral but the neighbor who had reported him was willing to become his caretaker, so we took him to a special vet and had him neutered and returned to his territory. “Tiger” as he is now known has a nice shelter and is being well fed. 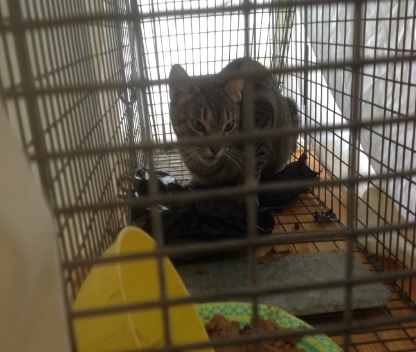 This is another cat we trapped thinking it might be Chuck. She looked thin – another feral. We took her to be vetted and discovered that she was lactating! Fortunately, the neighbor who had told us about her had just that morning discovered where she was hiding her kittens. We rescued them as well and took them to a shelter that accepts feral cats, which is very unusual. From the neighbor we learned that this kitty had been around the neighborhood for several years and had produced many litters. We think there is a strong possibility that she is Chuck’s Mom and that the neighborhood Chuck look-alikes that we trapped were her offspring that had survived.

Nothing succeeds like persistence. Days, weeks and then months went by and we were starting to get discouraged. Most of our flyers were gone. People take them down or they deteriorate. Sightings had gradually dried up. The weather was turning cold. I decided to do a second EDDM postcard mailing. We immediately got three sighting reports in one evening, all in the same area just up the street from us. One neighbor sent us a cell phone photo of a cat on her deck. This time we were 99% certain it was Chuck.
With that kind neighbor’s permission, we set up a feeding station and a camera on their deck. The next night we caught Chuck on camera at about 8 PM

He ate all the food. The following morning, we set the trap and waited…and waited…and waited. By 9PM he had not yet come. Marci, the woman with the trail camera who was helping us, suggested that we disarm the trap by 9:30PM for overnight or we would only catch a raccoon or a possum or worse yet, a skunk. So, we drove over there at 9:30 and discovered a raccoon who had just gotten himself trapped but had not yet had time to eat the food. We released him and scattered the food around on the chance that Chuck would come by and be motivated to continue returning to that deck. The camera had, in fact, caught Chuck showing up at 10PM, but we missed catching him because we had disarmed the trap! 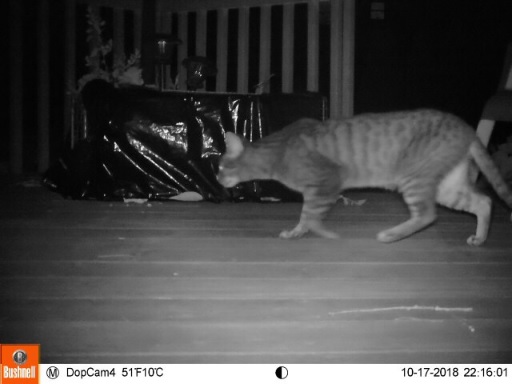 Chuck at last! The trap is sheathed in plastic to avert suspicion and put in place without being armed for a few days until the cat gets used to going inside.

The next morning, we again baited the trap and waited for the call from Marci who was monitoring the trail camera. Late that afternoon we got the call that there was a cat thrashing around in the trap. We flew over there. As soon as we spoke Chuck’s name and made eye contact the cat settled down. We took a good hard look and confirmed it was Chuck!

Since he had been on the street for about six months, we could not just take him home and release him to mingle with our other cats. Fortunately, our vet was able to see him without an appointment. Chuck was very subdued, almost as if in shock. He seemed to be in pretty good shape. He had lost a few pounds, but he was not emaciated. They treated him for fleas, mites and worms, and we took him home. The vet advised us to keep him isolated for a few days, that it would be like introducing a new cat. But after two days Chuck was anxious to be liberated and have the run of the house again. It was like he finally realized that we were his benefactors and he didn’t need to be afraid anymore! Our cat-sitter, Char, pronounced him “the new, improved Chuck”!

At last the ordeal was over. No more dashing all over the neighborhood at all hours responding to sightings. No more going to bed wondering where he was and how was he surviving. No more waking up in the morning to the renewed anguish of knowing he was lost. So, we are sharing Chuck’s story to help others achieve a happy ending.

Here are some important takeaways from our experience:

We should add that the method we used to recover Chuck worked well because Chuck did not go far beyond our neighborhood of several square miles. When searching for a lost dog or an adventurous cat, you need to exploit all means to elicit sightings far and wide: the Pet FBI database, all social media including Facebook and Nextdoor.com, Craigslist, and of course flyers. To be sure your flyers are the most effective, use the Pet FBI template and follow the suggestions for posting on our advice page. 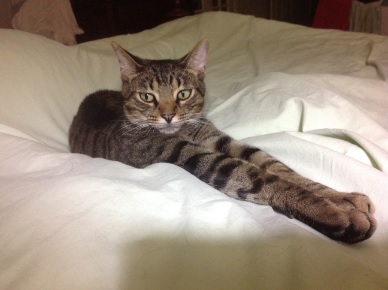 A more self-confident Chuck enjoying the comforts of home.

PLEASE SHARE YOUR STORY OF RECOVERING A LOST PET WITH US!
JUST SEND IT ALONG WITH SOME PHOTOS TO THE CONTACT LINK ON THIS