Pet FBI was founded in 1998 by Maresa Fanelli, a retired French professor looking for a way to consolidate information about lost and found pets. After a distressing experience trying to recover a lost cat, Fanelli conceived the idea of a free interactive online database for lost and found reports where worried pet owners and good Samaritans could  connect quickly and efficiently. For years Fanelli cared for a family of feral cats in her backyard. When one of them disappeared for a few days, she discovered the difficulty of recovering a lost pet through the shelter,

She hoped that shelters would also take advantage of the free database to post photos and information about lost pet intakes. Unfortunately shelters are slow to adopt new technologies. Even today, few shelters post their intakes online. Contrary to conventional wisdom, relatively few pets are recovered through shelters — only 17-30% of dogs and an appallingly low 2% of cats. If you are reading this, please encourage your local shelter to take advantage of Pet FBI’s  free database to post strays!

So Pet FBI was possibly the first lost and found pet site on the web. As of this writing  the Pet FBI database has more lost and found reports than any other national site including the major commercial sites.

As of January, 2016 over 70,000 reports have been submitted to the Pet FBI database, making it the most comprehensive collection of information about lost and found pets online.

Currently, about 40% of pet parents in Ohio who post a lost or found pet report follow up to indicate that it has been reunited/re-homed. The national success rate for Pet FBI is 20%. The reason for the difference is that Pet FBI is well known and widely used in Ohio since 1998, while it was only in May of 2014 that we expanded the database to cover the entire U.S.   Still,  we are certain that the rate of successful reunions is actually much higher both in Ohio and nationally, because many people do not bother to update their reports.

Over the years we had many requests to expand our database to cover other states. Finally in May of 2014, we put our fifteen years of experience to work to create the new bigger, better, faster Pet FBI! We were fortunate in recruiting a volunteer professional database programmer and a volunteer web site designer to help us.

Now we have a state-of-the art database that covers the entire U.S. As well as Puerto Rico and the Virgin Islands.

Pet FBI is incorporated as a non-profit organization based in Columbus, Ohio and assigned 501(c)3 tax-exempt status by the IRS. Pet FBI has always operated on an all-volunteer basis. From the beginning, our Board has insisted on a policy of keeping the site strictly non-commercial and free for all users. This is made possible through substantial support from our Board, and through voluntary contributions from the people we help.

We keep open books and our financials are available on our site. Because our Board subsidizes all operating and fundraising expenses, we are proud to be able to say that 100% of all donations from the general public goes directly to our programs, primarily the OUTREACH spay/neuter program. The Pet FBI OUTREACH program has also been supported by grants from PetSmart Charities, The Columbus Foundation, Ohio Pet Plate, The Kenneth A Scott Charitable Trust (A Keybank Trust), and the Combined Federal Campaign.

The Pet FBI lost and found program has benefited enormously from a generous AdWords grant from Google. The grant makes it possible for petfbi.org to come up at the top of search results for “lost and found pets”.  More users = better chances for a  happy reunion!

To view the video of an NBC TV interview with our founder, Maresa Fanelli, click this link to our blog post

To listen to an Animal Radio  podcast of an interview about Pet FBI check our blog post. 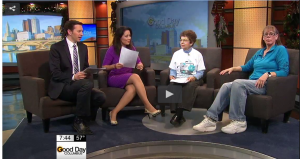 In October of 2002, we expanded our mission beyond lost-and-found information to include a spay/neuter outreach assistance program. Pet FBI OUTREACH was created to address the problem of pet overpopulation, which is one of the factors that makes the recovery of lost pets so difficult. As of January 2014, Pet FBI OUTREACH has implemented or subsidized the spaying or neutering of over 9,000 cats and dogs in the Central Ohio area. TNR (Trap-Neuter Release) is a major part of our program. OUTREACH provides hands-on and financial aid for elderly and limited-income people and people who are caretakers for colonies of feral cats. Learn more…

We welcome new volunteers and donations!