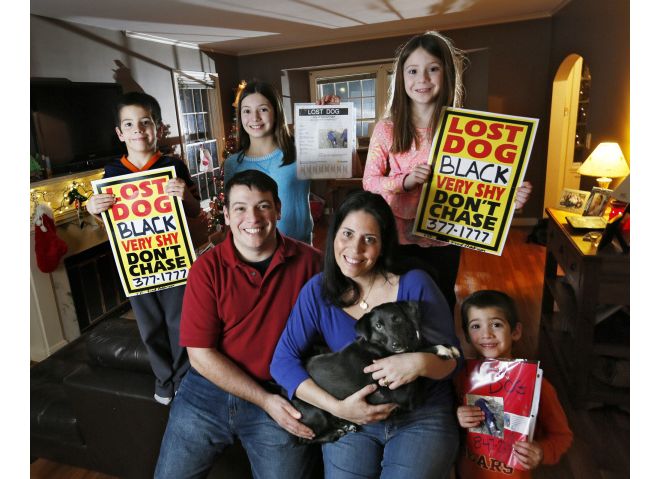 The moment Richard Fernandez squinted through the faint moonlight and saw a small black dog nestled in a corner of the trap, he dropped to his knees on the cold ground and wept.

It had been 12 days since the doctor at Nationwide Children’s Hospital finished an all-night shift, forgot to close a gate in the yard and didn’t realize that one of two family dogs had run away.

The frantic search for Addison, a terrier mix, that started on Nov. 22 consumed Fernandez; his wife, Julia Gomez; their four children; and many others in their Upper Arlington neighborhood.

It’s not unlike what you’d find in any community at one time or another: fliers stuck to trees, street signs or light posts bearing pictures of lost dogs, cats or other pets. But to find an animal that many consider nearly as much a part of a family as a child, some will go to the extreme.

Animal advocates in central Ohio tell stories about a woman who crawled through a dark drain pipe under a highway to rescue her dog. And a family that hired a trapper from eight states away to find their cat. Or pets being recovered after almost a year, or miles from where they were lost.

“Sometimes, I feel guilty helping animals as much as I do, but there are so many government programs and help for people and not so much for animals,” said Maresa Fanelli, executive director and founder of Pet FBI, a Columbus nonprofit organization that helps find pets with an online database that contains tens of thousands lost-and-found reports.

“What we track is the tip of the iceberg,” she said. “There are so many lost pets out there!”

With Addison missing, the Upper Arlington family was on a mission to find the pet they had adopted five months earlier.

The little black dog with white paws and a white streak on its chest was scheduled to be put down at the Pike County dog shelter in a few days.

Gomez had been searching online for dogs to adopt for a few weeks, but the hunt ended when she saw the picture of this one. Gomez and Fernandez, who moved their family to Columbus from Chicago less than two years ago, stopped at a pet-supply store and bought two leashes on their way to the shelter. They wanted two dogs, because both of their adopted dogs had died in the spring — one of cancer and the other from a heart condition.

When they arrived at the shelter, they were told by a worker to not touch the dog called “Auntie” or even make eye contact with her. Auntie, about 6 months old, had been abused by her previous owners, who had twice returned to the shelter to make sure their former dog was indeed going to die.

When Auntie saw her new owners for the first time, she hid behind boxes. Outside, the family’s twin boys, 5-year-old Mateo and Javier, were running around another black dog tied to a chain. One lick on Gomez’s leg, and the family had found its second dog.

The Chicago family renamed the one on the chain Wrigley, after Wrigley Field. And Auntie became Addison, for the street that is home to the famous Chicago baseball stadium.

“Daddy, it’s not your fault,” Elena, 8, told Fernandez. “It’s those bad people who made Addison scared and made her run away.”

A few hours earlier, Addison had run away after the weary doctor let the dogs outside and forgot to close a gate.

A neighbor called to say that she had tried to pick up Addison, but the dog ran away in a blur — zig-zagging through the Upper Arlington neighborhood toward woods on Ohio State University’s west campus. Addison had just warmed up to her new family, which had to approach the skittish pooch on hands and knees after they brought her home. She rarely had been outside longer than to do her business, not even for a walk.

The initial frantic search lasted all day in a cold rain as the couple and several friends scoured the area on foot and by car.

“When the kids went to bed that night, Richard and I sat down and put a plan in place,” Gomez said. “The attitude was, we were going to get her back no matter what.”

It was a freezing game day for OSU fans — and for all the people searching for Addison. Fans walking to the ’Shoe to watch the Buckeyes and Indiana play football were handed fliers and told of the dog’s escape.

Gomez figured that Addison likely was hiding in the woods or near the trails. She already had made calls to OSU, Upper Arlington and Grandview Heights police, who were kind enough to take the dog’s description. She contacted local animal shelters and used social media to blast out messages to every animal-advocacy group she could find.

But it was Wrigley, the other family dog, who used her nose to track and find Addison — for a fleeting moment. Gomez watched as Addison scooted from a field and across Lane Avenue, where she was almost hit by a car before she disappeared again.

“I knew right then we had to use traps if we ever had a chance to get her back,” Gomez said.

A homemade map was divided into six zones covering the OSU farm, the surrounding woods and Lane Avenue. Eventually, a humane trap was set in each zone to lure Addison. Inside each cage was a dirty T-shirt, a piece of Wrigley’s rug, and something like kids’ pajamas that held a family scent. Addison’s vet, Susan Barrett, and Don Corsimer, an experienced animal rescuer, helped the family set up the traps and video cameras that could record any visits by the lost dog.

The traps would capture raccoons, cats and opossums — all later released — but not Addison. Video footage also showed visits from coyotes, which made people worry about whether the 24-pound dog would survive.

“I thought coyotes would get her because she is just a little whip of a dog,” said Georgia Cullen, a family friend who helped search for 10 days. “This really was a needle in a haystack.”

“At some point, you are going to have to tell the kids that you are not going to find her,” Gomez’s sister said when told that the family was canceling its Thanksgiving trip to Chicago.

But the family, and now hundreds of other people who knew about the search, wouldn’t give up. They took turns checking the traps about every four hours. Runners cruised trails looking for the dog. OSU faculty members searched around their buildings. Gomez and Wrigley continued roaming in search of paw prints or a scent.

The four children prayed to St. Anthony, the patron saint and protector of animals. They lit candles and told their parents that they didn’t want to leave town for Thanksgiving in case someone spotted their dog.

No one had seen Addison for nine days, but Fernandez was still checking the traps in the middle of the night between his shifts.

It was 5 a.m. when the doctor knelt down beside one of six traps and received the only holiday present he wanted: Addison curled up in the back of the cage, alive and uninjured.

The family home became a haze of cheers and tears. A few hours later, they thanked the community by holding a banner on the corner of Lane Avenue and Kenny Road that said “Found Our Dog! Thank You!!!”

“I just kept saying, ‘Never lose hope, don’t give up, and miracles happen,’??” Gomez said. “Well, this was our family’s Christmas miracle.”

I Lost A Dog