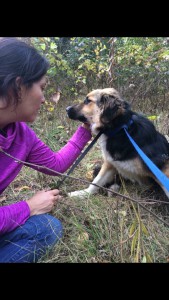 Fortunately, Pet FBI special agent, Julia, took a special interest in his case. She joined forces with Winston's foster Mom Rachelle and was also helped by Don, who had helped her capture her own newly adopted dog, Addison, about a year before when he went missing. They did all they could to lure Winston back. Knowing he was basically shy with people but friendly with other dogs, she used her own dog to help attract him. But Winston was still too wary. He even eluded the baited traps they set for him.

They knew the general area where he was because of sighting reports, and a compassionate homeowner allowed them to hang out on their property to try to snag him.

The day of the successful capture Julia and Rachelle spent hours lying in lurk on the grass hoping Winston would approach. Finally he did and Rachelle used a slip leash to snag him. She got nipped a few times but Winston is finally back in safe hands.

Newly adopted pets are the most prone to run away. Pet FBI gets lots of reports about such situations.

It may be necessary in cases of a shy or frightened dog to use a trap for recovery. (See Julia's advice about trapping a stray dog, also read Julia's own amazing story about recovering her own newly adopted dog Addison).

If you can get a dog to approach you, a skip leash is a good way to snag it, but it is risky!